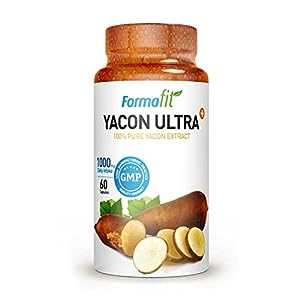 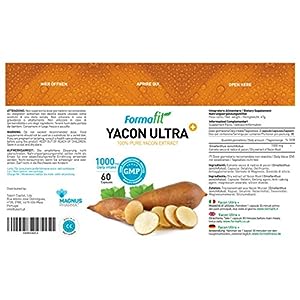 Product prices and availability are accurate as of the date/time indicated and are subject to change. Any price and availability information displayed on [relevant Amazon Site(s), as applicable] at the time of purchase will apply to the purchase of this product.

The yacon root has a high pre-biotic effect, assisting the development of the intestinal flora with beneficial effects at various levels.

The Fructooligosaccharides (FOS) contained in yacon feed the intestinal flora and result in various beneficial effects on the metabolism.

Yacon is a plant indigenous of the Andean region, whose leaves and tubers are consumed as food in several countries in Latin America. Unlike the normal potato, in which the energy is stored in the form of starch, the yacon potato is rich in inulin, the greatest natural source of FOS, dietary fibers with reduced caloric value.

The consumption of FOS has a positive effect on the intestinal flora, increasing the general health of the gastrointestinal tract. This allows a number of benefits in the body, namely a better absorption of calcium and essential minerals, and greater resistance to disease-causing bacteria.

In addition, when the bacteria digest the FOS, they produce short-chain fatty acids, which have shown positive effects on the metabolism.

We also know that the FOS regulate the creation of certain gastrointestinal peptides that are involved in the rate of gastric emptying and help to modulate food cravings. That means yacon is also an appetite suppressant, helping people eat less in a natural way.

There are no reviews yet.

This site uses Akismet to reduce spam. Learn how your comment data is processed.